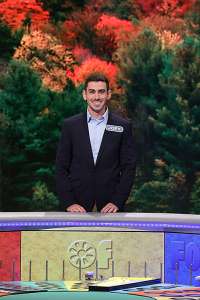 Joseph Gallant, a 2016 graduate of the MPH in Epidemiology program, recently had the opportunity to appear on the game show Wheel of Fortune. Joseph says that he has watched Wheel of Fortune since elementary school and always dreamed of being a contestant.

“Wheel of Fortune has a big, yellow bus called the Wheelmobile that travels around the country. I saw a commercial that they were visiting my local mall and decided to try out. Two weeks later I found out I got a call back, and then I was very excited to receive the letter in the mail that said I would officially be on the show!”

Joseph finished in third place with $1,850, which he says is not a bad consolation prize for 30 minutes on the show. He says that it’s much harder to solve puzzles in front of an audience with lights and cameras. In the end, he has only positive things to say about the experience.

“Being on Wheel of Fortune was an unforgettable experience. The contestant supervisors and the rest of the crew were extremely encouraging to all of the contestants. On stage, Pat even cracked jokes during commercial breaks to calm everybody’s nerves. It truly was a once in a lifetime experience!”