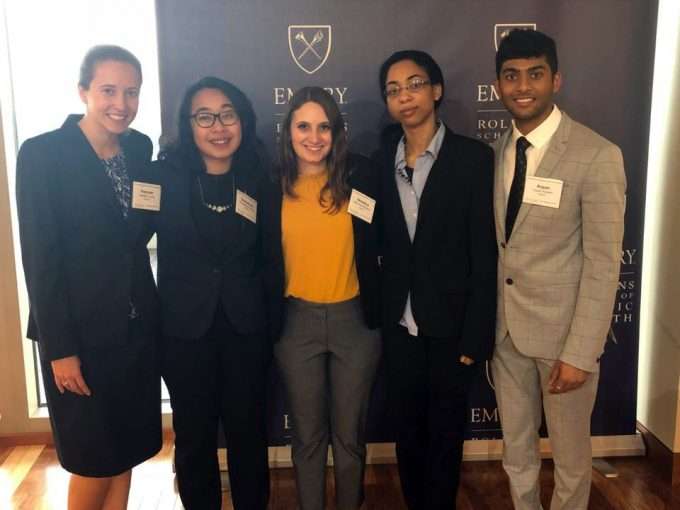 A University of Florida team received honorable mention, the highest a UF team has placed, at the 2018 International Emory Global Health Case Competition.

UF’s team included Cheyenne Cheng, a psychology major; Leanne Dumeny, an M.D./Ph.D. student studying genetics and genomics; Hannah Lyons, who is majoring in history and microbiology; Arpan Parekh, an economics major; and Veronica Richards, a master’s in public health student with a concentration in epidemiology.

Emory provided teams with their case one week prior to the competition. This year, teams were challenged to respond to a hypothetical outbreak of coronavirus at the 2022 FIFA World Cup in Qatar. The UF team researched the cultural landscape of Qatar, the economic effects of a FIFA World Cup, disaster response during mass gatherings, the resources made available by the World Health Organization and the Centers for Disease Control and Prevention, and general principles of advertising and marketing. Their recommendations included constructing an elaborate disaster response communications network, creating branded face masks to prevent spread of the virus and establishing an initiative to unify the citizens of Qatar.

Each team was assigned a case advisor, and the UF team was paired with Jeffrey P. Koplan, M.D., M.P.H., Emory’s vice president for global health and a former director of the CDC.

“We were lucky enough to work with Dr. Koplan, who has firsthand experience dealing with the SARS outbreak, which was extremely useful with our coronavirus outbreak case,” said Richards, who will enter UF’s epidemiology Ph.D. program this fall.

After qualifying for the semifinals, the remaining teams were presented with a twist in the case and one hour to prepare a response for judges: rumors of bioterrorism at the World Cup. The UF team created a risk communications strategy to mitigate fear and investigate the rumors of bioterrorism.

The UF team placed fourth, behind teams from Emory, the University of Minnesota and McMaster University.

“This experience has taught me how to be more resourceful in handling a public health crisis,” Richards said. “Not only did my team have to use many different sources from text books and the internet, but we realized how important each other’s field of knowledge was. In classes, you never really get to experience how interconnected and interdisciplinary the field of public health is, but working with such a diverse team, I realized how necessary all of these things were.”